An Early Episode of The Empire’s Preemptive Counterattack on The Monstrous Races in The Savage South, 2019

The Murderous Cool Down Rhythms That Snuck Through The Air During The Eleventh Hour in The Valley of The Rocks, 2019

The Low Frequency Shade Broadcasted By A Donestre Towards The Story of The Altrightland in The Age of Monster, 2019

This body of work continues Chisom's sci-fi epic in which People of Color have abandoned a dying Earth to explore the universe. Westward Shrinking Hours specifically depicts Monument Valley on Earth, where Confederate and Union soldiers have traveled to investigate reports of 'monstrous' people detected in the territory. What they find is a population in various states of evolution—these so-called monstrous or grotesque physicalities are in fact mutations developed to assist in their survival post environmental fallout. Overt conflict erupts across the narrative, and envelops the viewer in a volcanic palette.

The flushed, crimson paintings composed in fiery reds, oranges and yellows, are in contrast to the dark cool tones engaged in his last series, When the Night Air Stirs. Here, overt conflict replaces a subdued aftermath of nuclear fall out, as phase two of Armageddon unfolds.

Chisom’s seductive palette is indeed attractive however, upon closer inspection, something is a bit off. The initially beautiful compositions are tempered with the dichotomy of dark imagery. An Early Episode of The Empire’s Preemptive Counterattack on The Monstrous Races in The Savage South, and When They Roost On Hollow Men, portray overtly violent scenes, while Westward Shrinking Hours Pt. II is subtle but foreboding, as a horse stands alone in Confederate garb, blatantly missing its rider. Here we have the implication of people, the impressions of humans and their violent undoings, but the focus lies on Monument Valley as a symbol for Chisom’s decaying, war-torn world.

Monument Valley lies within the territory of the Navajo Nation Reservation. Known for its dramatic beauty, this landscape also serves as a symbol of America’s dark history—the young country’s race to expand and colonize the west under the guise of Manifest Destiny. The symbolic features illustrated in Chisom’s work utilize history and mythology to activate an imagined, not so far future where the battleground is based physically in a very real past.

Chisom's work proposes a paradigm shift for the future. The artist's compositions reference the radicalized idioms of Victorian fantasy illustration, and use the romantic landscape as a site where apocalyptic narratives of white supremacy, Christianity, and climate change intersect—creating a scenario in which most of the built environment has been obliterated and transformed into a toxic, hallucinatory wasteland. 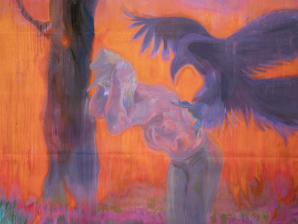