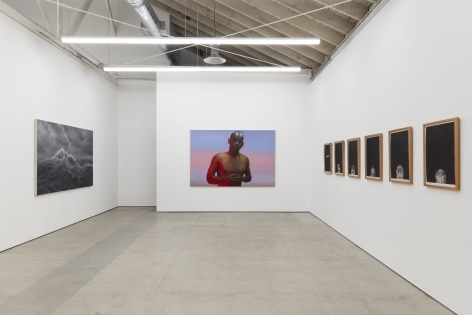 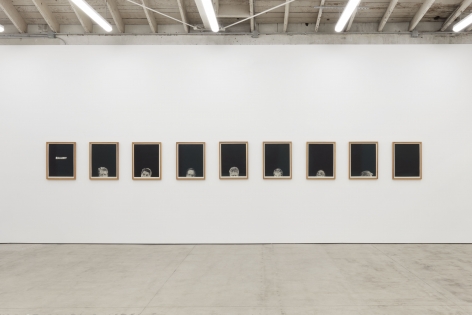 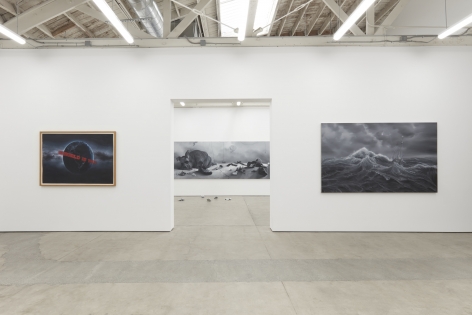 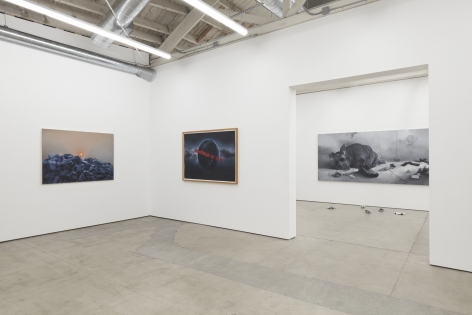 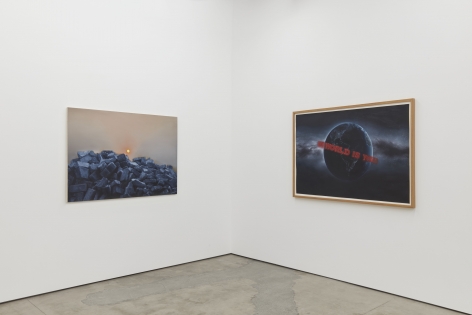 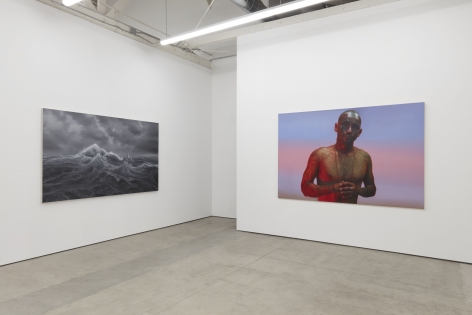 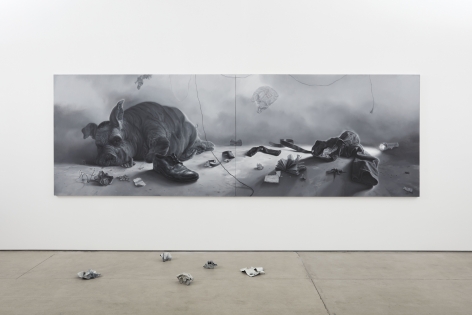 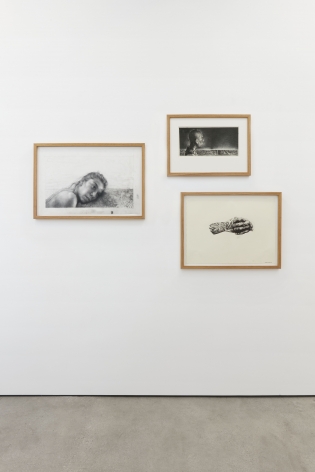 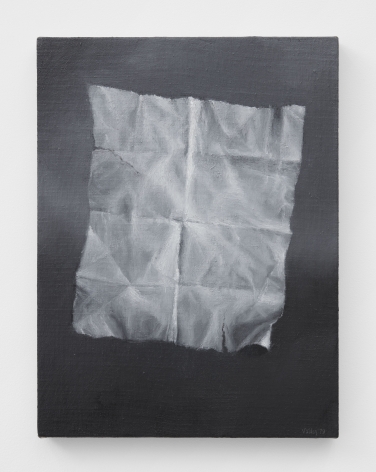 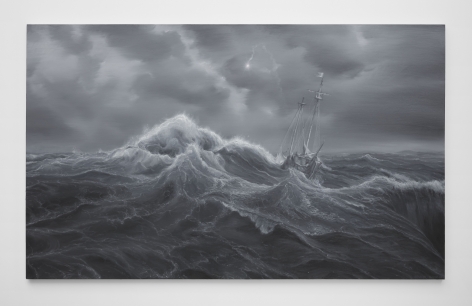 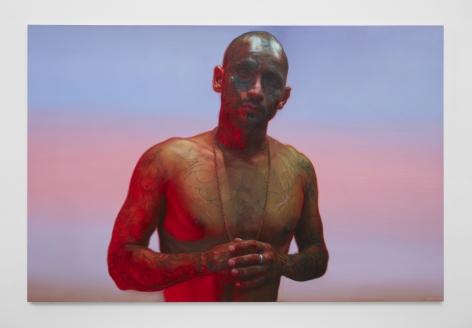 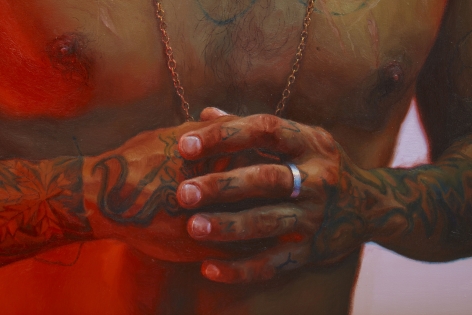 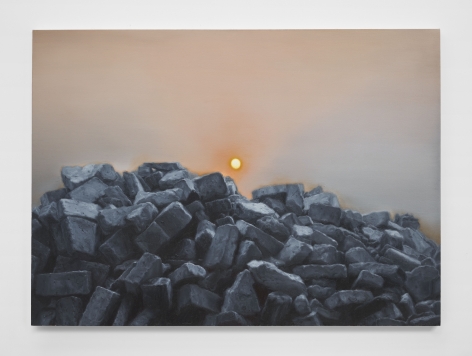 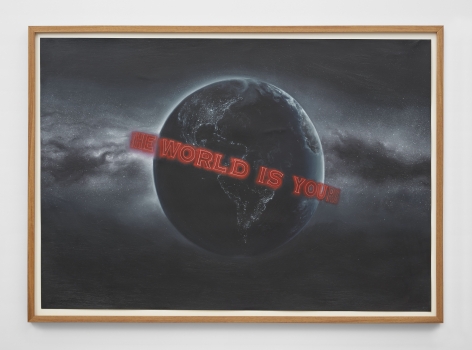 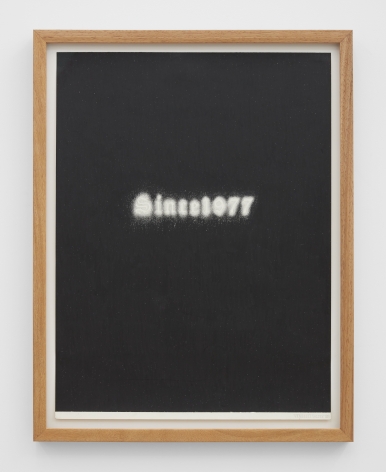 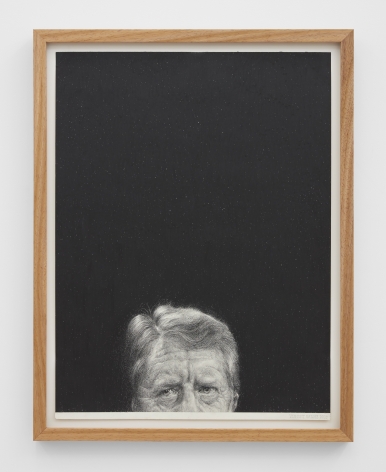 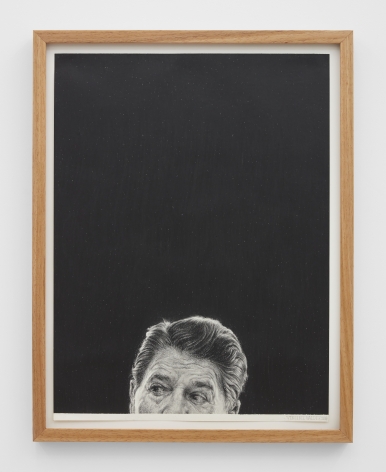 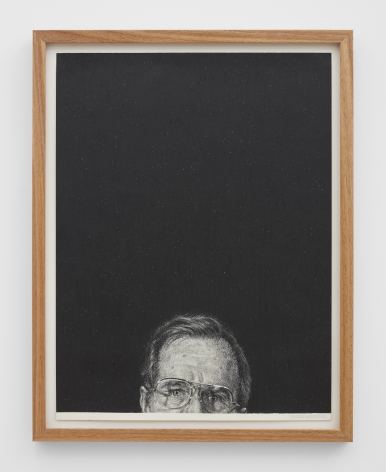 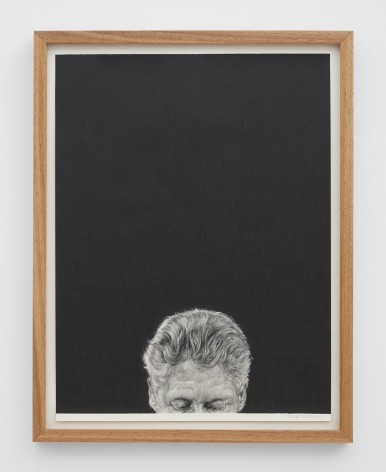 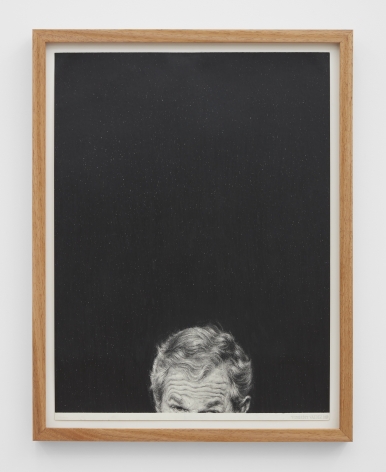 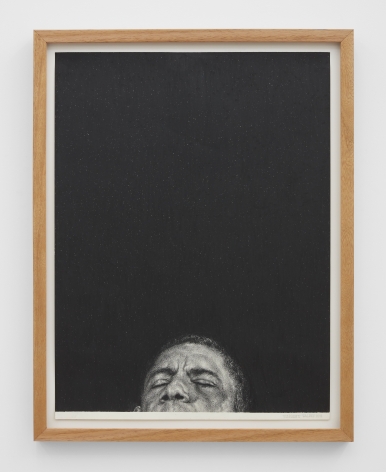 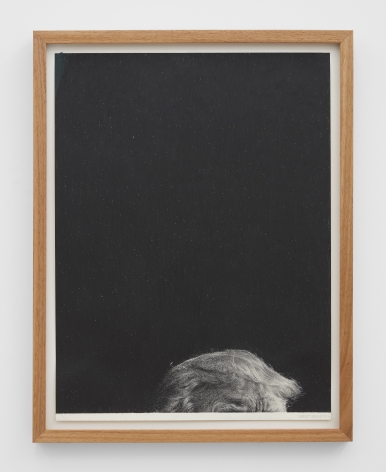 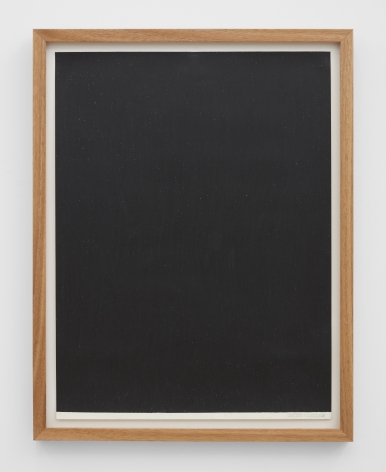 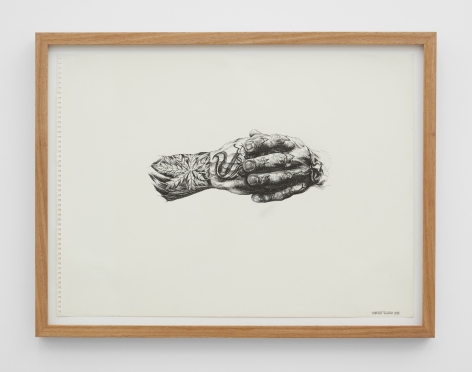 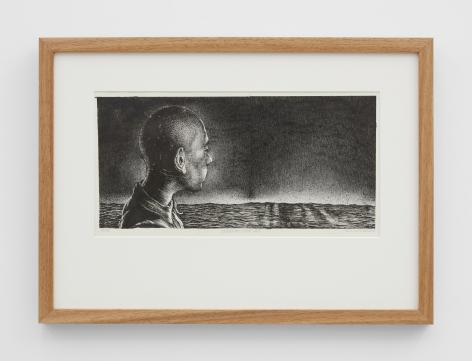 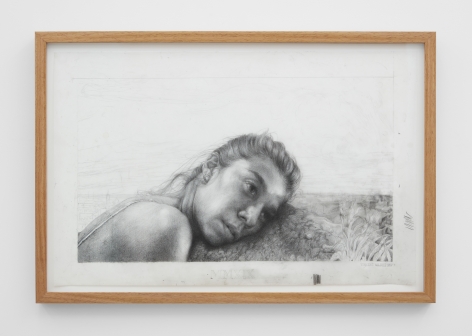 It Was Never Yours, Valdez’ first exhibition at Matthew Brown Los Angeles, continues the artist’s focus on generating visual counter-images in an effort to examine the omnipresent social amnesia in America. Alarmed by the denial of history, Valdez stands firm in the belief that the artist must play a role in a rapidly changing society.

At eight feet across, So Long, Mary Ann is a monumental contemporary portrait—a subject often activated by the artist to remark on a universal struggle within various socio-political arenas and eras. Here, the portrait of an anonymous man cropped in bust format, shirtless and covered from the top of the head down with tattoos, is rendered in a fiery, intense palette. Exuding an outward peace, his eyes suggest a moment of self-reflection. The hands, gently clasped, imply a pious contemplation. In contrast, the history inscribed on his body signals one of turmoil. Caught in an eternal conflict with his own existence, the proposed moment is balanced between volatility and sanctity or redemption.

“Mary Ann” is tattooed on the figure’s neck and across several fingers on his left hand. The inscribed name is presumed to be the subject’s deceased mother and stands in symbolically for the portrait’s identity. The title, So Long, Mary Ann is taken from Leonard Cohen’s song So Long Marianne (1967). Here are two men from very different circumstances, connected by their tale of the loss of a woman with the same name.

If examined closely, a hint of isolated light glimmers in the right eye of the figure in So Long, Mary Ann. This light is an imagined reflection of the sun breaking over the horizon in nearby painting, Rise—reinforcing the effect of duality present in both images.

Valdez describes Rise as the nucleus of the exhibition and its most optimistic work. In the foreground and occupying the bottom half of the composition, a massive pile of stone implies, at the same time, the building blocks of a structure to come, or a collapsed, decimated wall. The pile is lit by a hot sun, burning through dark haze to signal the dawn of a new day or the sun setting. The work proposes an intentionally timeless landscape which could be set in the past, future, or to describe a rise after collapse.

It Was Never Yours portrays Earth from the perspective of space. The text “THE WORLD IS YOURS” hangs menacingly in red a halo circling our planet. The globe is suspended in the ethereal glow of the Milky Way, seductively rendered with the deft articulation of a photograph taken by the Hubble Telescope. The painting conjures Earthrise, the iconic photograph that was taken from lunar orbit by astronaut William Anders in 1968, during the Apollo 8 mission. Nature photographer Galen Rowell declared it "the most influential environmental photograph ever taken". Its philosophical significance resonated powerfully with humanity in the midst of nuclear threat and the Cold War—we live on an isolated, fragile planet and we must take care of it.

On one end the saying “The world is yours” conveys ultimate and complete freedom. If the world was yours, you could have everything you wished for—unlimited and for the taking—but this undoubtedly comes with a price. The image is a direct reference to the Universal Pictures logo, although the white typeface included in Universal’s logo is replaced here with a glowing-red typeface reminiscent of neon signage marrying the language of Hollywood and American consumerism—both are in the business of selling an unattainable dream.

Inextricable from Scarface, the image depicts a metaphor for greed and power and the absurdity or fallibility of total control that many world leaders strive for—self indulgence at the cost of everything else. In the film, Tony Montana achieves the elusive ‘American Dream’, overcoming humble beginnings to procure a life where money is no object. Although he seems on top of the world, Montana’s version of success is hollow, and pushes him further and further into isolation, until it is of course the cause of his demise.

A crumpled and torn bronze ‘paper’ trail leads to Valdez’ sixteen foot diptych titled Eaten. Hovering between the tradition of still life and allegory painting, the work is replete with signifiers but devoid of the celebrated abundance pictured in its historical predecessors. The main subject of Eaten is a large male pig (modeled loosely after J. Edgar Hoover) who occupies the left half of a nondescript, post-apocalyptic wasteland. In the disorienting, foggy environment, human objects and debris flurry and are strewn like tumbleweeds across the otherwise barren landscape. Pants, wallet, watch, a torn shoe, and floating plastic bag (which reads “Thank you; Have A Nice Day”) all convey the trappings of everyday life. Upon closer inspection, a human hand and foot reveal themselves—appendages protruding quietly from underneath the gluttonous main subject. The insatiable animal has consumed America and confronts the viewer directly without remorse.

Valdez’ mastery over the depiction of light is clearly evident in all works but here it is a striking focal point. Rendered in grayscale, the black and white palette suggests a somber memorial and conjures the format of historical narrative—ever provoking how the past continues to affect the present.

Since 1977 (notably, the year of the artist’s birth) is a series of drawings picturing the seven presidents who have occupied the executive office since that year. Each portrait is reduced to a set of colored eyes and hairstyle (vapid cosmetic features that have been major factors in voting patterns since television began occupying the homes of all Americans and media began running elections). Valdez has deconstructed these prominent and revered figures to elemental physical human features (ears, forehead and hair) and basic human emotions such as shame, fear and anxiety. Since 1977 is designed to signify decline. Valdez’ sequential narrative unfolds over the series and as time goes on, the figures sink further into the foreground in a chronological decay.

Valdez’ technical mastery is a dexterous conduit for the “critical moments of silence and clarity that artworks can activate during times of immense distortion and chaos”. Their presence is enough to stop you in your tracks. A year in the making, It Was Never Yours was realized in the wake of The City (Blanton Museum of Art, 2018) and Dream Baby Dream (currently on view at MASS MoCA), however this new body of work dispels with Valdez’ typical approach to art making. Rather than focusing on a single subject or series, It Was Never Yours is a broad inquiry, allowing for seemingly disparate subjects to create their own narrative. Across twenty-one paintings, sculptures and drawings, this conceptually expanded body of work resonates with the myriad concerns and conversations society must activate.

It Was Never Yours presents Valdez’ visual memorials to the experience of being human.

Vincent Valdez’ subjects are framed by personal experiences and an examination of contemporary life in twenty-first century America. Distorted social realities such as economic and racial inequality, conflict, hyper-nationalism, sanctioned violence, and other systemic patterns that historically serve as prelude for democratic decay compel the artist to reflect on his social environment.

Valdez was born in 1977 in San Antonio. He received a full scholarship to the Rhode Island School of Design, earning his BFA in 2000. A recipient of the Joan Mitchell Foundation Grant for Painters and Sculptors (2016), as well as residencies at the Skowhegan School of Painting (2005), the Vermont Studio Center (2011) and the Kunstlerhaus Bethania Berlin Residency (2014) and Joan Mitchell Center (2018), Valdez currently lives and works in Houston.

The artist's work is currently on view in Suffering From Realness, curated by Denise Markonish at MASS MoCA through January 2020. It Was Never Yours marks Valdez' first solo exhibition at Matthew Brown Los Angeles.

It Was Never Yours, press release 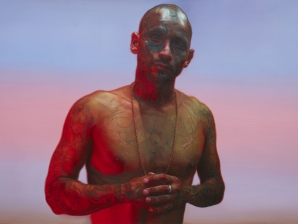